Some People Still Argue for Assimilation: Why This is Still Wrong

Whenever I talk about Dual Language Education, I always find well-meaning individuals, (at least, I hope that they are well meaning), who have to tell me how their grandparents gave up their European language(s) in order to become more “American,” and how our students, too, should assimilate. I often wonder if these well-meaning people have stopped to think about what assimilation really means. Do they realize that assimilation is about giving up one’s own authentic identity in favor of someone else’s identity – an act that should never be expected or desired from anyone? Do they realize that assimilation is an act where those who have been placed lower on a socially-constructed, racial hierarchy try to behave like those higher on the hierarchy, often in hopes of sharing the power at the top of the hierarchy? Do they realize that by asking our students to assimilate, we are asking them to give up who they are in favor of preserving the culture of those, who based on a socially-constructed, racial structure, are in power? And do they realize that our Black and Brown students are “American” just by virtue of living here but will never receive the same benefits that their European ancestors did through assimilation due to the restrictive yet amorphous, country club nature of Whiteness?

Racial identity groups, albeit a very real social experience, were created not based on biology but for the purpose of ensuring that people in power stayed in power. Linnaeus, the father of taxonomy, fashioned the prevailing racial taxonomy for this purpose, placing people who had never before considered themselves as having a common identity into boxes that now forged them together into imposed identity groups. (Imposed Identity is the identity somebody else places upon someone based on outward appearance, behaviors, history, and the convenience of the person imposing the identity.) For example, Linnaeus placed all Africans, regardless of kingdom, tribe, religion, language, etc. into one imposed identity group called Blacks. He placed whom he called Black at the bottom of this racial hierarchy; he placed Native Americans right above them; he situated Asians above the Native Americans, and he crowned Whites at the top of his hegemonic construction. This structure fueled the desire for many to give up their own cultures and traditions and to assimilate to become more White and thus, gain the power at the top of the human food chain. One innate problem with having the goal to join the top racial bracket was that who belonged to that top bracket was never clearly defined, making assimilation an uneasy bet where one would give up one’s own cultural identity in hopes of receiving the benefits at the top of the power structure, a bet that those who tried to assimilate rarely, if ever, won.

What made a person White and thereby at the top of the hierarchy has never been clear. The definition largely depended on what gave those already classified as White greater power. For instance, the One-Drop Rule made certain that those with even a drop of African blood could not receive the coveted powers of the ruling caste. As little as 1/16th Black blood rendered you Black; nevertheless, with only 1/16th Native American blood, as long as the rest of your blood was considered White, you were considered White. This seemingly arbitrary rule matched the real purpose of racial identity groups…economic benefits for the powerful. Being Black forever ensured the free or incredibly cheap labor that enslavement and Jim Crow afforded rich Whites. It allowed for rape of Black women by White enslavers without the fear of losing their financial interests. On the other hand, erasure of the Native American identity allowed treaties and promises to be ignored, which in turn benefited the pockets of rich Whites.

Registration of Birth and Color

Another example of how arbitrary the definition of White was can be seen in this “Registration of Birth and Color” from Virginia. 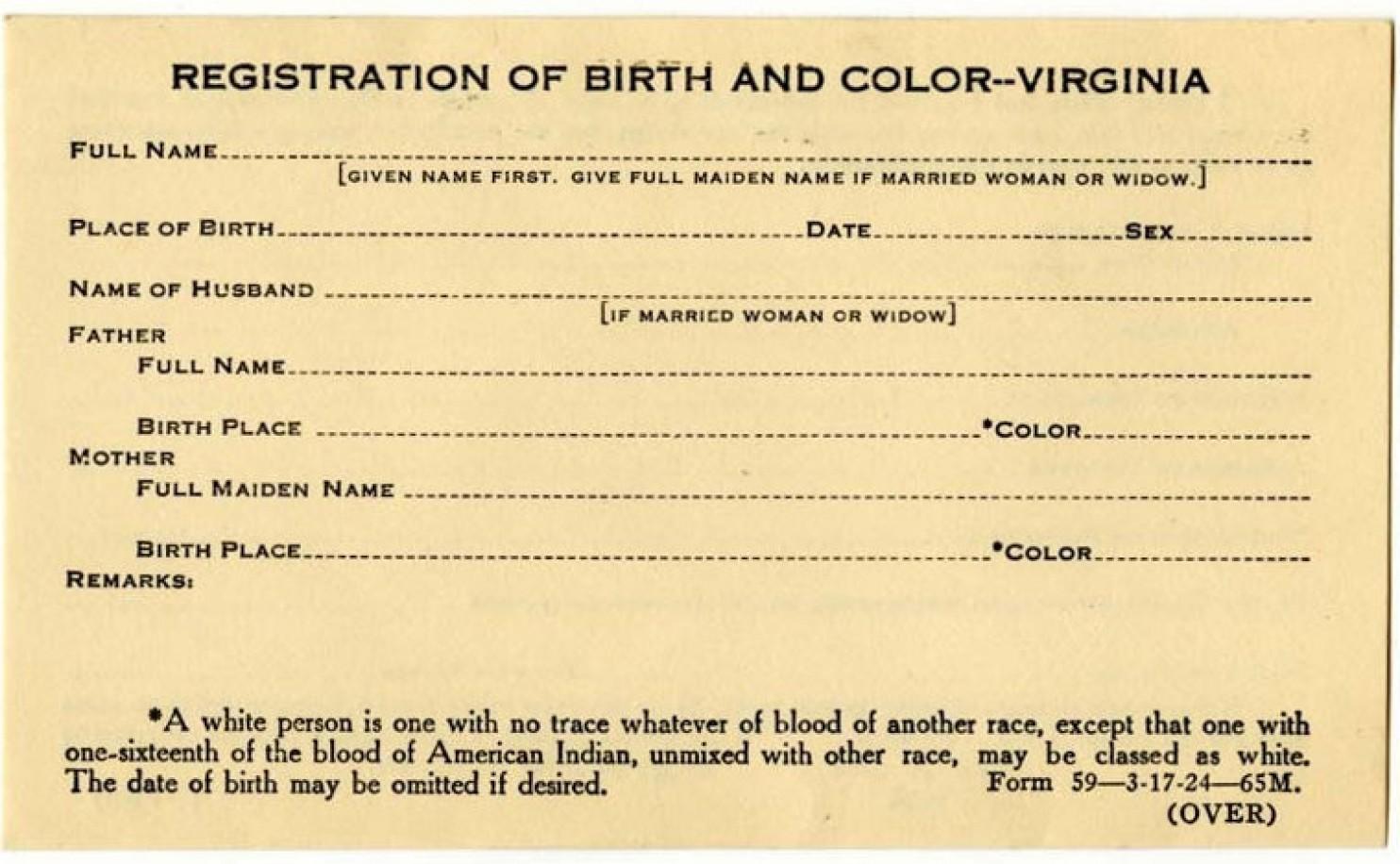 The definition of White, given at the bottom of the form, was the absence of any other race. Hence, there was no actual definition of who was in fact White, leaving the power of defining Whiteness in the hands of those who were already identified as such.

This lack of definition led to two interesting Supreme Court cases where defendants who had tried to climb the racial hierarchy through assimilation learned that it wasn’t as easy as they had hoped. In Ozawa v. United States (1922), Takao Ozawa, a light-skinned, Japanese-born man had done everything he could to assimilate. He had gone to high school and college in California, adopted Christianity and attended church regularly with his family, had 20 years of continual residence in Hawaii, and had adopted English as the language of his home. Yet he was not permitted to become a citizen because he wasn’t White and, according to the Majority opinion, “…the words ‘white person’ were meant to indicate only a person of what is popularly known as the Caucasian race.” In other words, although the Courts applauded Mr. Ozawa for giving up his authentic identity, Mr. Ozawa would never be afforded the privileges associated with being White.

The 1922 psuedo-scientific racial definition was then challenged by Bhagat Singh Thind, a man of Indian origin, who claimed Whiteness on the basis of upper-caste Indians being scientifically classified as of the “Caucasian race.” He assured the Courts that the rigidity of India’s caste system had preserved the purity of his Caucasian blood. This scientific identification was after all, ostensibly, the key factor that caused Ozawa not to be classified as White. However, in Thind v. United States (1923), the moving target of Whiteness was legally established. “It may be true that the blond Scandinavian and the brown Hindu have a common ancestor in the dim reaches of antiquity, but the average man knows perfectly well that there are unmistakable and profound differences between them to-day.” Thus, the Supreme Court established that White was what the average man decided was White. The “average” man was he who was already declared White because only Whites could be considered average. Hence, who could be White was determined by who was already White. This circular logic ensured that those in power could admit into their country club of Whiteness only those who would help them retain power.

To be fair, some have argued that for at least Eastern Europeans, assimilation has worked – at least if working means moving up the racial hierarchy. For instance, there are those who have argued that Italians, who were accordingly not considered White and were victims of the largest lynching in American history, were able to climb the hierarchy through assimilation. They gave up their language and created connections to historical figures such as Christopher Columbus. This argument suggests that Italians were so successful in the goal of assimilating or becoming more like those higher on the hierarchy that they became part of the coveted White power structure. Of course, if this argument has any merit, one must consider what had to be given up to achieve that status. Is it ever worthwhile to give up your cultural identity?

Countering this argument or perhaps better explaining it, however, is the idea that Italians and other Eastern Europeans were always considered White but were lower on another sub-hierarchy that exists only among Whites, a hierarchy Eastern Europeans could climb due to their phenotypical characteristics that are far more similar to Western Europeans than any other racial group. After all, which other of Linnaeus’s categories could potentially suit Italians? On the other hand, visibly Brown and Black communities can never assimilate enough to have the “look” necessary to move up along the larger hierarchy.

Similar to the argument that Eastern Europeans were able to become White, Isabel Wilkerson in Caste suggests that although the US is soon to become a White-minority country, the hierarchy will adjust itself such that the average man, (note the average White man), will allow more people to enter the White race and thus, the country will recalibrate to maintain a White majority identity. This will not only ensure the continued existence of a racial hierarchy, but will also ensure the continued barriers to climb the racial hierarchy for those not admitted to the country club.

Regardless of what the future holds or how easy or hard it is to climb the socially-constructed, racial hierarchy, we should not be encouraging any of our students to become like anybody other than themselves. One of the 5 CASEL Socio-Emotional Learning standards is self-awareness. How can we expect students, regardless of race, to be self-aware individuals if they are being asked to give up their identities? Our job as educators is to help students, especially Third Culture Kids – kids whose heritage cultures are different than the dominant culture – to understand and value their complex identities. We must help them keep their heritage languages through programs such as Dual Language Education, and we must bolster their pride in their multilingual identities. When we work on sociocultural competence with our students, we must help our students explore their own identities so that they can figure out who they are and how their authentic identities intersect. We must encourage what I term transcultural acculturation. I define transcultural acculturation as the process through which one recognizes that one’s cultural characteristics are a mix of the heritage and dominant cultures and that these characteristics create unique, complex, and wonderful individuals.

The bottom line is that all of our students are treasures just the way they are. Our job is not to make them change, but to help them build on their strengths, maximize their potentials, and recognize just how fabulous they really are.